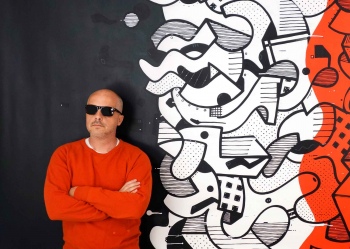 Born in 1969 in Chile
Lives and works in Los Angeles, USA

Born and raised in Chile, Flavien Demarigny only became the street artist and painter Mambo during his career as a graphic designer in Paris. He is now represented at galleries from L.A. to Zurich and describes his works as "visual puzzles". Back in the 1990s, he collaborated with several Paris-based street art collectives, including "Force Alphabétique" and "9ème concept". Mambo's earlier works, such as his Brainology series, were highly influenced by graffiti style, featuring outlined, moving elements intertwined to create typelike structures and wall-filling patterns. He continued this series with his work at the Völklingen Ironworks World Cultural Heritage Site in 2019. According to Mambo, it is about “illustrations of the brain,” and the piece captures his “emotional dynamics” at the time. The work holds special significance for the artist, as his great-grandfather built brick chimneys for factories in France over 150 years ago. Putting his composition in a similar chimney created a strong sense of connection to his ancestor.