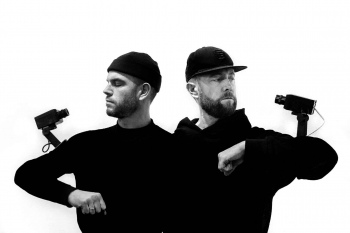 Les Frères Ripoulain are Mathieu Tremblin and David Renault. The name alludes to the Parisian group of street art pioneers of the 1980s called Les Frères Ripoulin around artists such as Nina Childress and Jean Faucheur. The installation Dummy Birds plays on the theme of the initially subliminal threat from Alfred Hitchcock's classic 1963 horror film, The Birds. In Les Frères Ripoulain’s work, the place on the scaffolding, which in the film is occupied by the frenzied birds, is occupied by fake cameras that are actuated in an uncanny way by motion detectors. The philosopher Slavoj Žižek once described the birds in the film as standing in a close, complementary relationship to the law (the maternal claim to dominion), while at the same time incarnating utter evil. Surveillance in public space seems to be like the birds in Hitchcock’s terrible vision: they encroach when the rulers feel threatened. At first, they seem harmless. When we finally become aware of the danger, it may be too late.