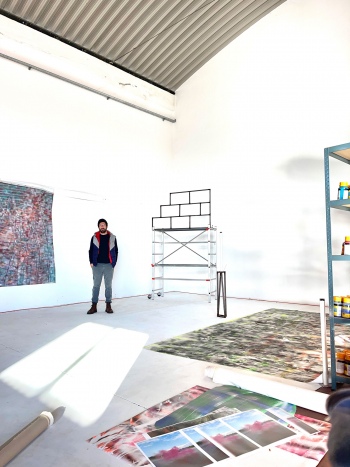 Born in 1993 in Brescia, Italy
Lives and works in Portugal and Lebanon

Filippo Minelli became known in the 2000s as a representative of experimental urban art. Since then, he has navigated between Street Art and Contemporary Art, between the emerging spheres of the ‘Second Life’ of social media and the image machineries of the Internet and a tradition of urban intervention in real space that he has (co-)renewed – with a mixture of formal play and political and social commentary. His works can be immediately memorable without lacking depth. His graffiti of social media logos in unusual environments have cult status. MySpace on corrugated metal walls in Third World slums, Google Maps on the Great Wall of China, or Twitter in the (very real) echo chamber of a crowded poultry farm shack. Although he often appears as a contemplative observer, Minelli has never shied away from provocation. Minelli’s engagement with spaces can also be understood as a contemplation of landscapes. In the series Paisagem (Portuguese for landscape), he revisits this classic genre. Using an inverted stencil technique – the same one, incidentally, that stands at the very beginning of the history of painting – he brings real traces from the exterior he surveys – palm leaves, twigs, and grasses – onto the canvas and at the same time works out picturesque all-over compositions.