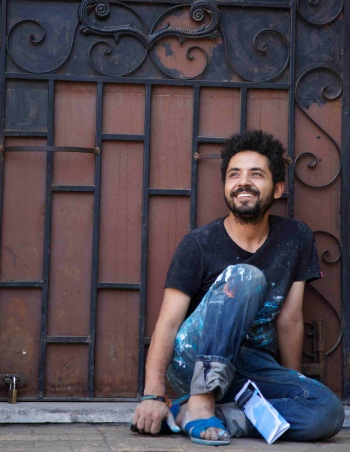 born in 1980 in Mynia, Egypt
lives an works in Cairo, Egypt

It's not unusual today for art to travel from the streets into the galleries. But very few artists travel in the opposite direction. Ammar Abo Bakr studied art in Luxor. As the Egyptian revolution 2011 on Tahrir Square took its course, Abo Bakr – whose motto is "If you make art, make it public, so that it's close to people's hearts" – took his art outside. Graffiti soon became the art of resistance in Egypt. Its motifs included street fighters and portraits of martyrs, but also poetic allegories of hope. These images derived their significance from their existence, their real presence, at the scenes of unrest, and they became an integral part of the events that followed.
In the Paradise of the Völklingen Ironworks World Heritage Site, Ammar Abo Bakr created the work Happy Yemen in 2015. He was reacting to the military intervention in Yemen of an Arab alliance under the leadership of Saudi Arabia and with Egypt’s participation only a few days earlier. The work was based on a press photo of a little girl who died in this military action.